This blog is obviously long defunct. It isn't a bad archive, though, so no plans to delete it. Look at my profile for more active projects. Relatively speaking.
Posted by Mike at 9:19 AM No comments:

My year end list is somewhat hampered; my old laptop was stolen back in June, and so half a year's worth of new music and movies disappeared. Out of sight, out of mind.

As usual, this is a list of things I encountered for the first time in 2008, not necessarily material produced in 2008.

The Dark Knight - A completely obvious choice for best movie of the year. I know there was something of a backlash, and it has always had its haterz, but these people are wrong. This movie showcased Oscar worthy performances and the final action scene with the Joker is the most perfectly crafted superhero action scene ever. Perhaps not as spectacular as X-Men 2's opening White House scene, but far more intelligent.

There Will Be Blood - A 2007 movie that I saw perhaps a week after writing my 2007 best-of list. This movie is an absolute tour-de-force. Every last second was engaging; I was either staring in awe or laughing and clapping, overcome by movie's sheer power. Good stuff.

That's all for movies, I guess. I just can't think of any others I really liked. Death Race?

The Wire - If I had to find a comparison for this series, it would be The Lord of the Rings. Vast, epic, sprawling. This is the finest series ever to appear on television, and I have a difficult time believing it will be topped anytime soon - at least, in terms of the series as a whole. The finest single episode ever is from...

The Shield - Christopher Marlowe and Shakespeare have been compared to one another by saying that if Shakespeare is the high-minded, carefully crafted Beatles, then Marlowe is the gritty, working class rock of The Rolling Stones. This works for the Wire and the Shield - the Wire might have Shakespearan perfection, but the Shield brings the badass ownage at every turn. The final three hours of the series are the best 3 hours of television ever, topping any single episodes of the Wire. It is absolutely necessary to protect yourself from spoilers.

30 Rock - Tina Fey stars as a non-threatening nerdy sex symbol. All sorts of liberal anxiety surrounding race. My praise for this show: at least once an episode, every episode, I laugh out loud, while alone, while sober.

Mad Men - The early 60's period piece about ad execs. Part of the appeal is certainly the feeling of cultural superiority we get from watching clips like the ones I linked to, but these screwy moments are surrounding by fantastic acting, writing and visuals. Highly enjoyable.

After Finitude: An Essay on the Necessity of Contingency by Quentin Meillassoux. Deleuze claims that real thought only takes place in response to a shock; this book delievers a few hundred volts. Usually when I come across something I disagree with, I have one of two responses: I can dismiss it as stupid and wrong, or I can search for a way to make peace with the idea. Incorporate it into my standing opinions, re-interpretting the idea. It is very rare that I come across something that resists both of those options; Meillassoux is telling me that I am wrong, completely wrong (and on fundamental issues to boot) and I suspect he might be right. I still don't know what to do with this book.

Difference and Repetition by Gilles Deleuze. I'm starting to think of this book as a guide to intellectual anarchy. His smackdown of common sense is refreshing. Good fun.

Blood Meridian by Cormac McCarthy. I'll simply link to my review of the book.

I'm going to take more time and do more reading this year. This past year was a clusterfuck for me, in a lot of ways.

Half a year's worth of new music disappeared back in June, so this is a truncated list.

Skeletal Lamping by Of Montreal. The over-the-top-band that has replaced The Flaming Lips in my crazy catagory. I liked their previous album more, but this one has plenty of fun to be had.

Gogol Bordello. No particular album. Just watch this, and imagine them on a stage twice the size, singing and dancing insanely like that for two hours. Best concert I've ever seen. I can only imagine the horrible damage the lead singing is wreaking on this vocal cords, but you know what? Good on 'em (and admit it, those two girls are hot).

New category. Find all of these on Itunes.

The History of Rome - A witty, charming recap of Roman history from the beginning to the end. On-going. This is my favorite podcast.

BBC's Ideas - Informative discussions on everything ranging from Spinoza to the Romantic Poets to the Great London Fire to late 19th century British/German relations.

CBC Radio 3 - An hour of fantastic Canadian music. Now is a good time to jump in, given that their best-of-the-year stuff is now out.

Homunculus by Hideo Yamamoto. The follow-up manga from the creator of my favorite comic, Ichi the Killer. A man gains the supernatural ability to see the physical manifestations of people's personalities. Insanity ensues.

There you have it.

Playing with alternate versions of established characters is a common past time for comic writers. Marvel has What If?, DC has Elseworlds and various other ways for a particular writer to put his own stamp on a character.

Marvel's Ultimate line is probably the most successful re-imagining of an entire world I've ever come across (The MAX line might be better, but it does not re-create the whole Marvel world). The Ultimate line has done its best to place Marvel's primary characters into a realistic world. I think they've largely succeeded in this, with a list of caveats I won't bother to discuss.

Among the Ultimate line, the best was (emphasis past tense) The Ultimates, the new version of the Avengers. I think the redesign here is a brilliant triumph, and while the plotting and art in general are great, I`m going to focus here on the redesign itself.

The Ultimates are a military unit, the member's own claims occasionally to the contrary. They were developed by the U.S. government, for the sake of the U.S. government. And really, who else would have the funds or the ability to put together a real-life superhero group?

It is this intimate connection to the powers that be that provides a great foil for the re-creation of Thor. I've never really enjoyed the character of Thor; his speech has always ann

oyed me. Ultimate Thor is an entirely new beast - probably the character with the most radical changes. No longer does he speak in ye olde english; it's contemporary English for him now. No longer is he high and mighty; he's leftist activist, and for this reason, has no interest in joining a group of U.S. military lackeys.

Thor has a great story line early on in the series concerning his godhood. The Ultimate world, being a place that is only just now being introduced to superheroes and mutants, has no more experience with genuine magic than our world does. So, Thor's allies are rightfully skeptical about his claims to godhood.

This really highlights a difference between the Ultimate and the old school Marvel worlds. If a character shows up in the old school marvel world and claims to be a god, well, maybe he is; there are certainly enough of them around. In the Ultimate world, however, the government agency SHIELD has a file on Thor. It appears his real name is Thorlief Golmen, and that he was a nurse who suffered a complete mental breakdown and finally managed to steal super-soldier equipment. Liar, lunatic or lord?

Another character to recieve a great revamp was the Hulk. He's a one-note character in any universe, the the Ultimate line finally took what is in my opinion the obvious route and made him all about sexual frustration. Bruce Banner is a nice guy, in the worst possible way. He elicits the worst kind of hateful pity from both characters and readers. He knows this, too, but he's too pathetic to actually express any anger about it. And so the Hulk comes out, and suddenly Hulk goes from a one-note character (smashing) to a two-note character (raping and eating). Some great humour is pulled out of the Hulk's preference for cannibalism.

Captain America, another character I've always had a distaste for, receives only a minimal revamp. He's the same old highly competent, patrotic military officer. His highlights in this series are all the times he is obviously willing to fight dirty; if kicking a guy in the balls is the way to bring him down, then Cap will do it. His hard, violent pragmatism is a nice outgrowth of his nationalism. I think the main change with Cap is character design. Gone is that ridiculous chain mail and those retarded Robin Hood boots.

Iron Man's redesign is particularly fantastic. Even as a kid, I hated designs of Iron Man that actually displayed muscles like his abs and biceps. The guy wears a suit of armor, not tights. Ultimate Tony Stark himself is still identical to the core of the pre-fascist Marvel Tony Stark (Orson Scott Card`s prattling aside), but the armor is very, very different. Now he looks like a robot, or a jet that requires a great deal of time for pre-flight preparation. The armor isn`t quite as invincible as the classic armor, either. Visually, this is certainly my favorite character. Alas, in volume three, the armor is much closer in appearance to the classic armor.

Finally, we have a pair of characters that are, classically, a complete waste of panel

space. Quicksilver has always been a transparent Flash rip-off, and the Scarlett Witch`s powers are nothing other than deus ex machina waiting to happen. The Ultimates, though, pull these characters off wonderfully. How? With strong suggestions of old-blood, Imperial Family Style incest. A pair of useless characters has been transformed into a creepy, hilariously obnoxious favorite duo.

As I`ve suggested, Volume Three of the Ultimates is excreble. A shame.

How long will it be before I get to number eight on the list...
Posted by Mike at 3:52 PM 1 comment: 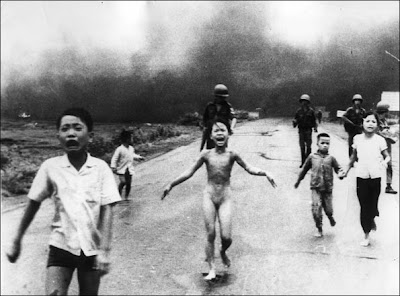 In which I hope that every last shred of right-wing mudslinging at Obama turns out to be true.

Let's hope he is just as buddy buddy with Weathermen, fierce critics of Israel and outright big-C Communists as the popular right insists he is.

To the extent that the wingnuts were right, is the extent to which Obama might actually live up to the hype.
Posted by Mike at 7:03 AM 2 comments:

Mike
Seoul, South Korea
Nothing to see here, move along.